The hull is ready for the final touches. The exact locations of the portholes are an important part of the looks so I made templates to check the positions. Although the portholes are marked on the aluminium a fine tune of some cm can make the looks better. Also the size of the "cat eyes" was increased a little. There was a long delivery time for these so we decided to make the portholes as one off. For the spray hood I also made templates. The German owner has difficulties to visit his boat because of covid so sending pictures was a good alternative to discuss items before they were made. 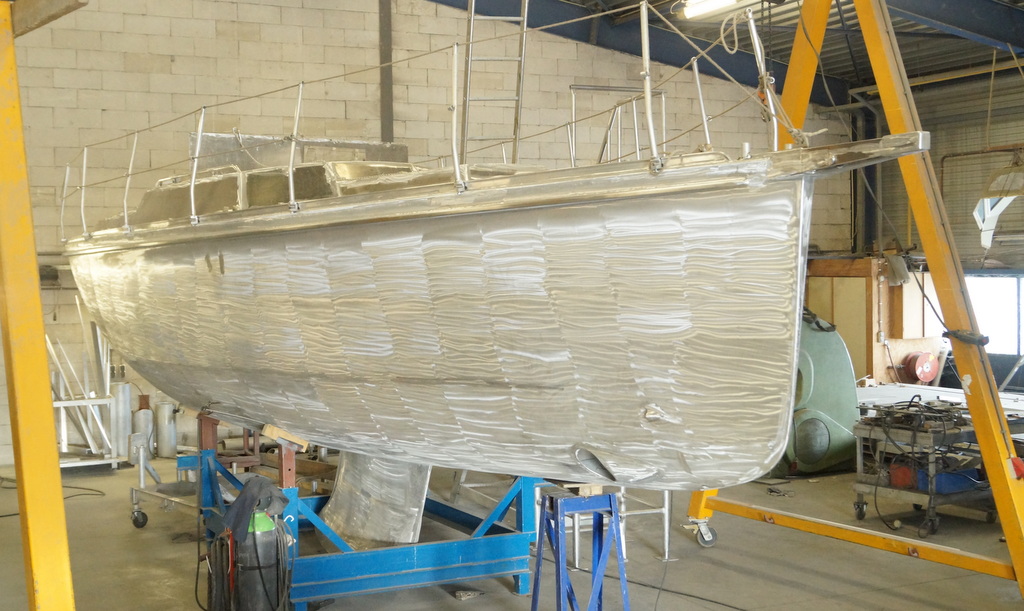 Based on No 487 JAGER 37 I made another aluminium version with positive transom. The idea of this version is to make it in a small serial production. The interior will be made prefab computer cut. Drawings are ready although we are still discussing small items before the build will start. 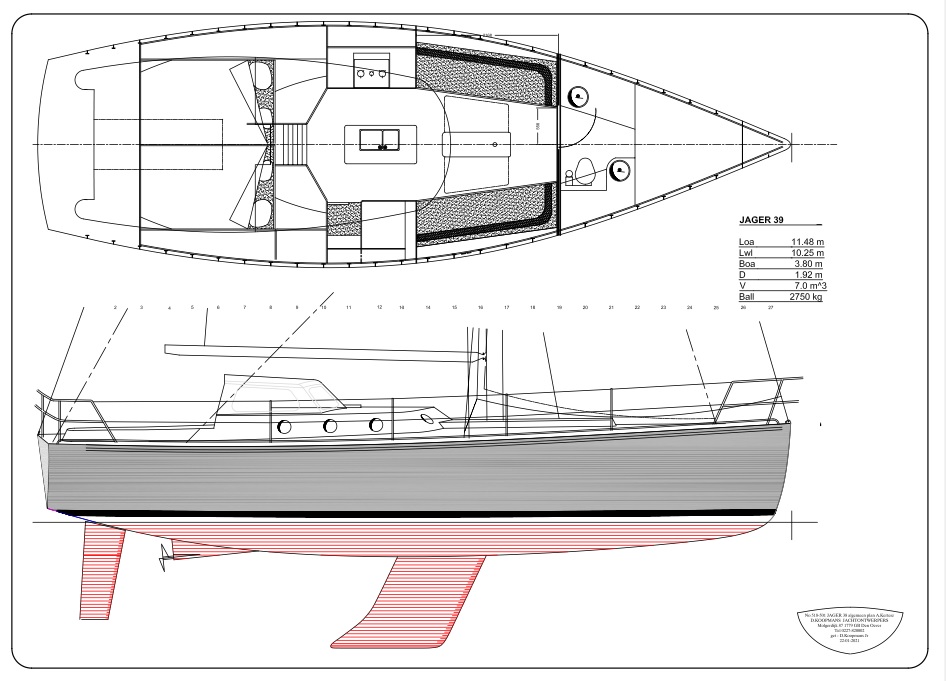 Together with the client we are working on the last details of the deck layout. It must be a beauty with special character but also a ergonomic perfect little yacht. I think we are close to the final layout and I hope to show it in the next news.

The client for design 519 who also works in design made a 3D print of the model and convinced me that it would work for me to have a 3D printer as well.

After some thoughts I bought a 3D printer building kit and within a few days the first hull (max 40 cm long) came out. Although more complicated surfaces like cockpits don’t always come out nice and smooth, it is really helpful to show clients the shape in an early stage. 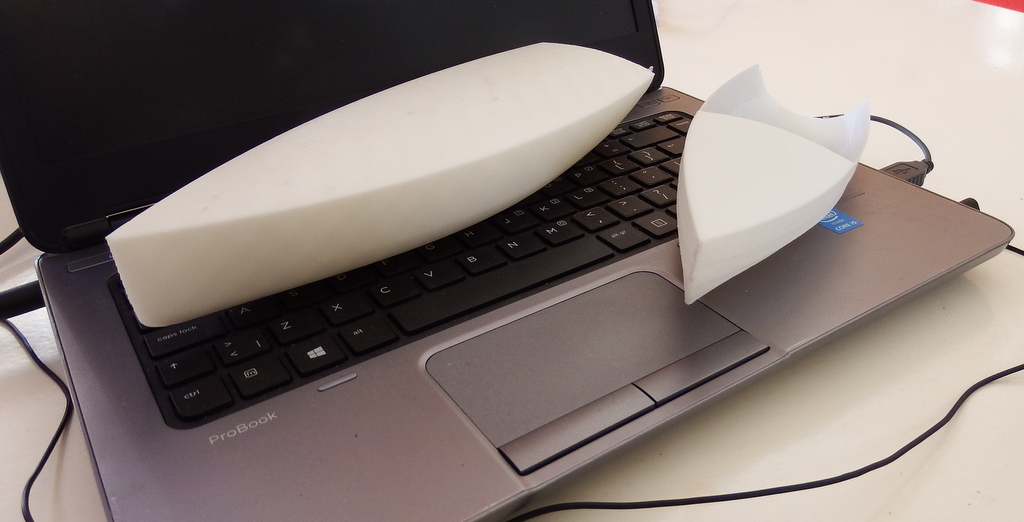 For Sentijn Yachts I started with a pre design for a 46 ft yacht. The bow must have a similar appearance of the Sentijn 37 while the transom will be more u-shaped. Steering will be with two wheels one rudder. Although it would not be my first choice it make sense if you want a more beamy cockpit with clear entrance from companionway entrance to stern. There will be a door in the transom so a fixed wind vane system can be mounted. 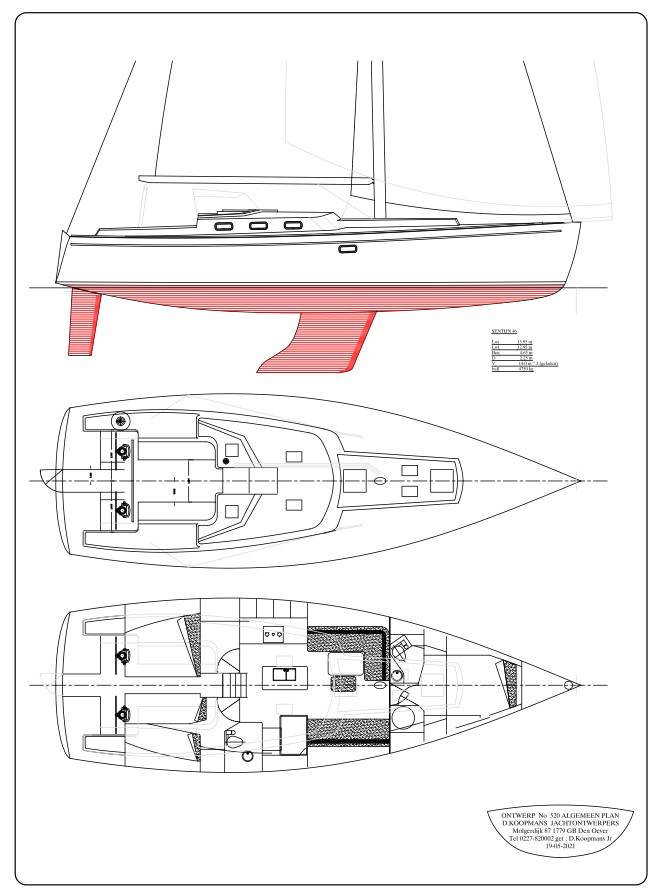 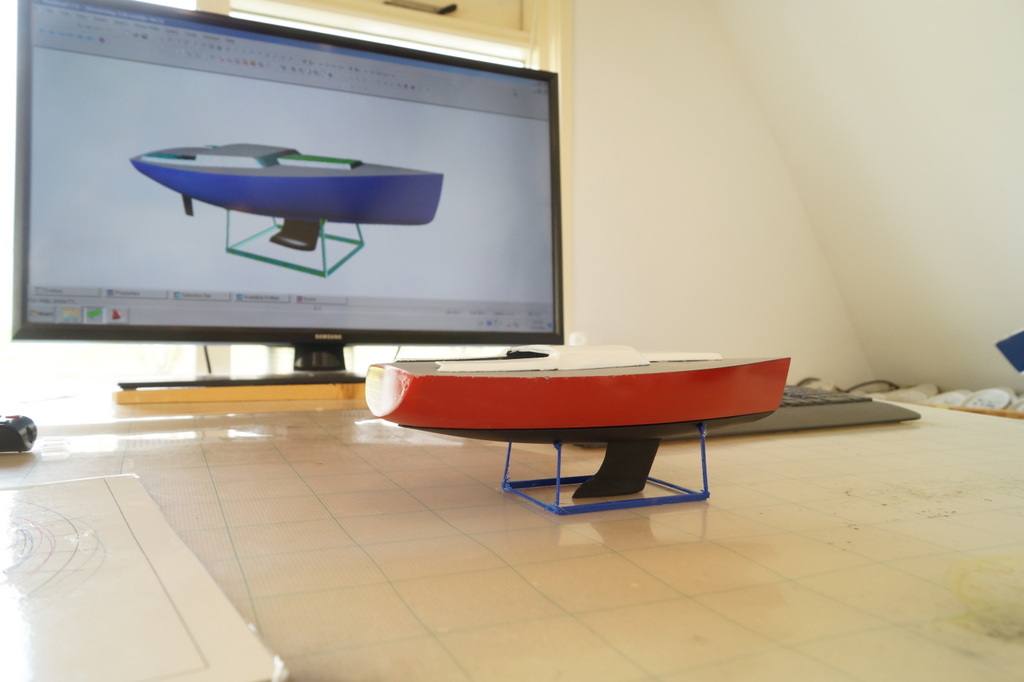 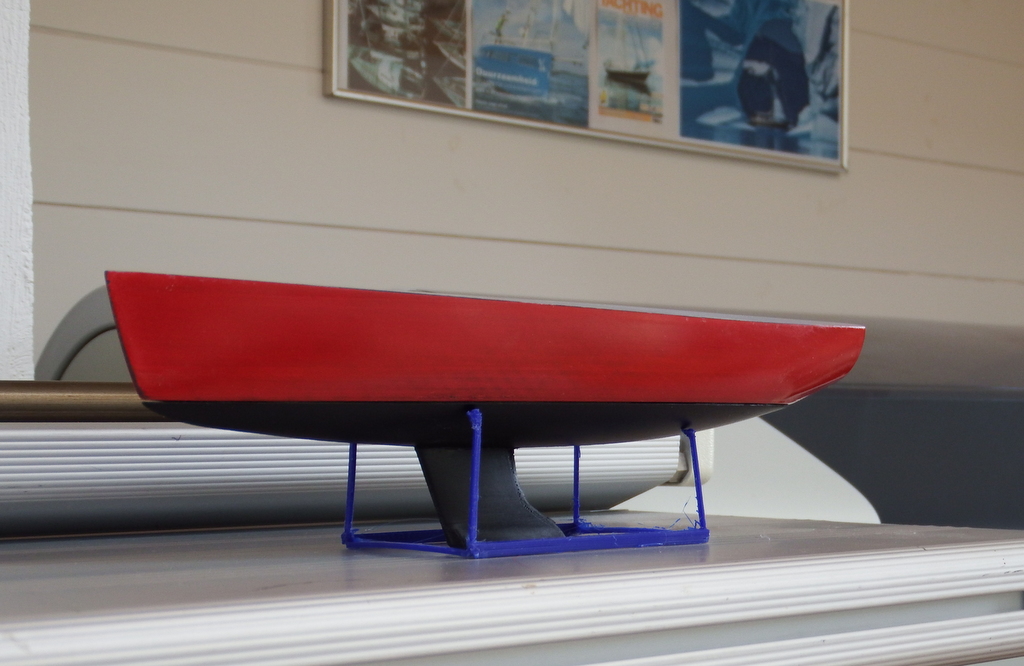 For this Frans Maas designed yacht built at Scheepswerven Janvandamme, Jan asked me to make some upgrades. The rudder is replaced by a hanged on rudder. This gives at least the same performance, is easier to make and the relative high freeboard looks lower as the rudder is now part of her silhouette.

I calculated a new laminate in glass instead of carbon. We will discuss some other parts of the boat next month.

Thereafter one boat will be build.

With the same hull moulds, some inserts and a lower freeboard we are working on a Booty scout version. Although basically for young people, with some alterations it can be a boat for all who want a small open low maintenance expedition boat. 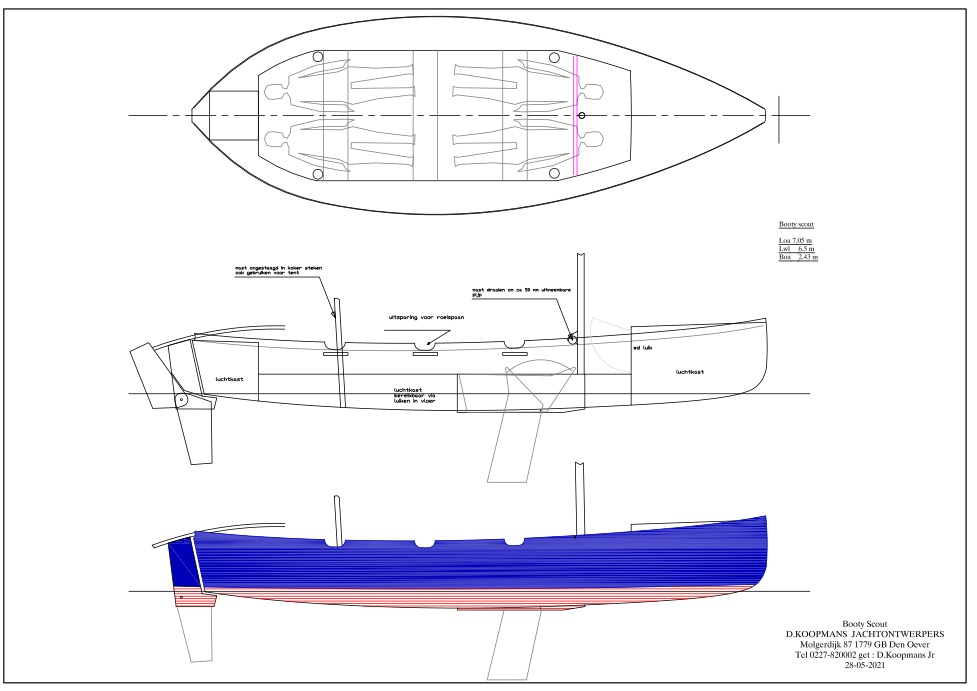 For a Jantine II design I designed a new keel with less draught and nearly the same performance. Although the old keel had a very efficient foil shape, it also had a relative high centre of gravity. Based in Lauwersoog on the Wadddenzee this will give the owner much more options. 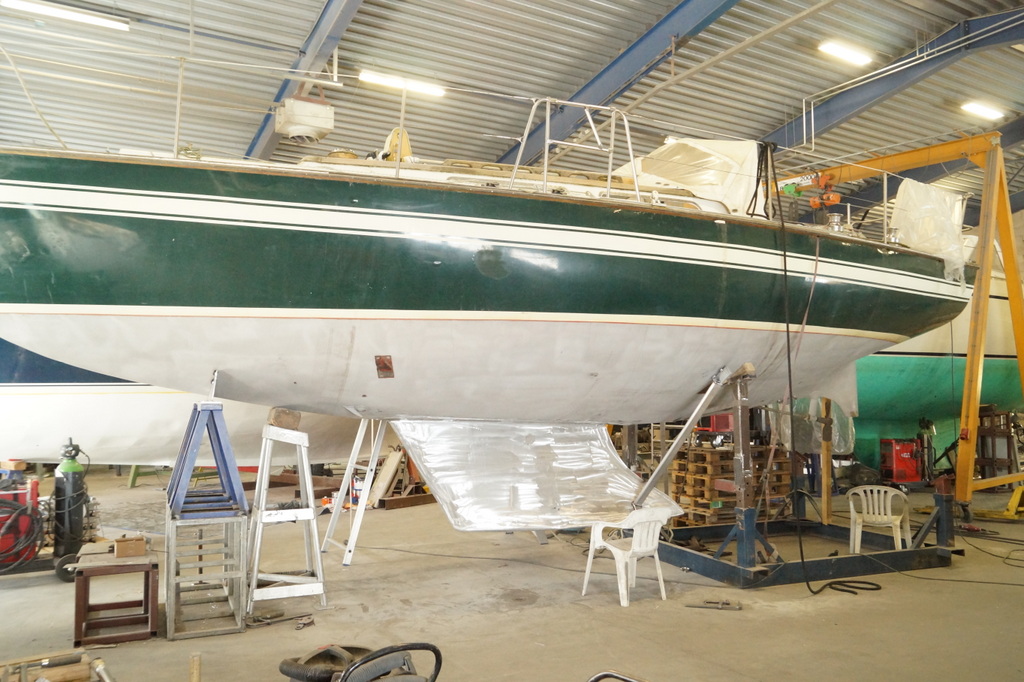 For Modus Marine I did some calculations and gave advice on a the Ridder Zilvermeeuw design. Before the keel is mounted I measured weight and centre of gravity. We now know the keel has the right amount of ballast and the bulb is in the right position for the centre of gravity in length. 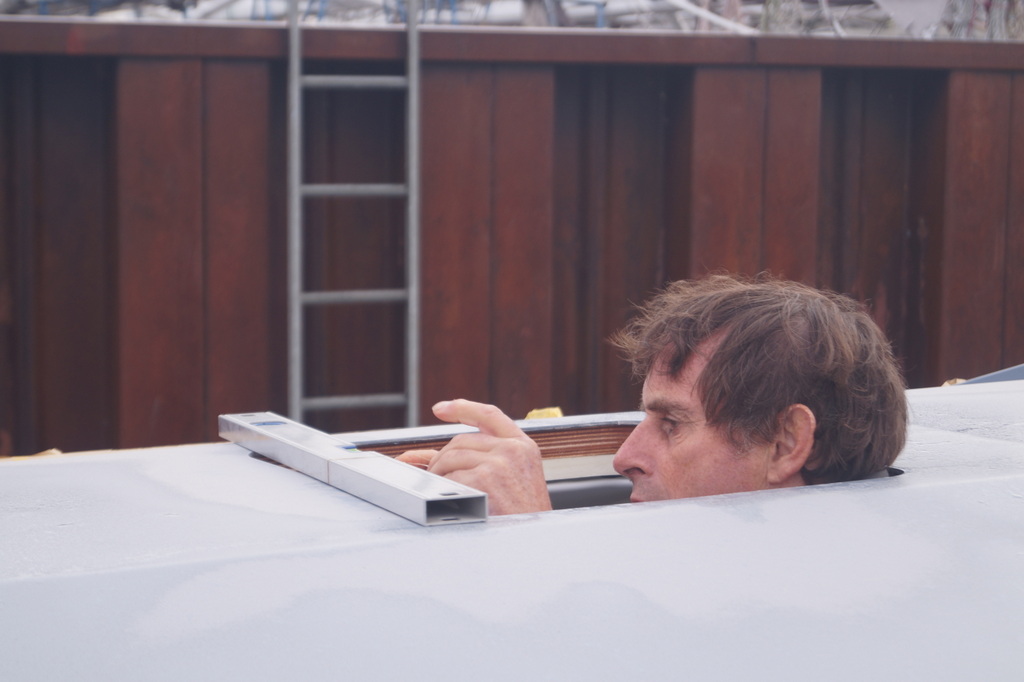 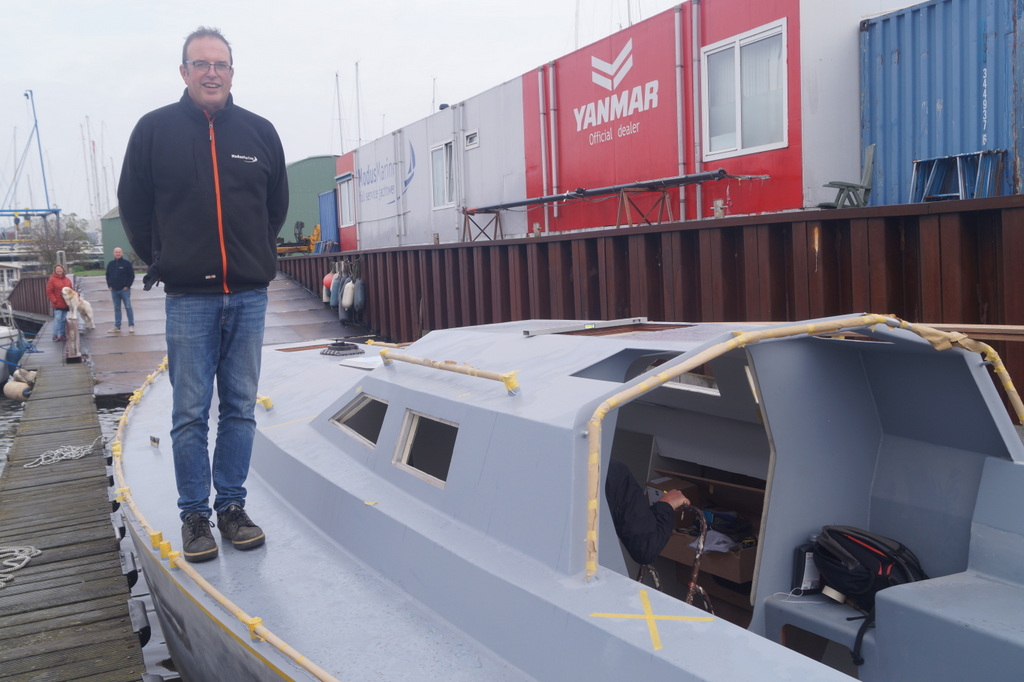 Beside designing I already did over a thousand miles of sailing this year.